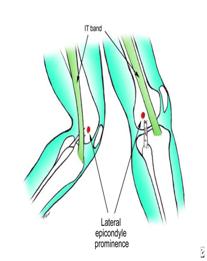 According to a study published this year in the British Journal of Sports Medicine, one of the five most frequent running related injuries among long distance runners is Iliotibial Band Syndrome commonly known as ITBS. In fact ITBS accounts for 12% of all running injuries.

What is the ITB and what is its function?

The ITB is a thick connective tissue that attaches to the side of the pelvis and inserts into the lateral part (outside) of the knee. Because of its position distally, it acts as an addition ligament across the lateral aspect of the knee, enhancing static stability. Proximally it acts as a hip stabilizer resisting hip adduction (inward motion). During a run, the ITB performs this function about 90 times per minute, or 22,000 times during a four-hour marathon (a highly repetitive motion).

Causes of ITBS are divided into intrinsic (biomechanical ) and extrinsic factors (errors in training).

Extrinsic factors:ITBS can be caused by overuse of the band, mostly due to errors in training. Sudden changes in surface (ie, soft to hard, flat to uneven or decline), speed, distance, shoes, and frequency can break down the body faster than it can heal, causing injury

How does ITBS Occur ?

When the knee is flexed at an angle greater than 30 degrees, the ITB moves behind the lateral femoral epicondyle (bottom part of the thigh bone). During knee extension, the ITB shifts forward in front of the lateral femoral epicondyle. The ITB is not attached to bone as it passes between the femur and the tibia. This allows the ITB to move forward and backward with knee flexion and extension. ITBS commonly occurs in runners through repetitive bending and extending of the knee joint. This repetition causes excessive rubbing of the bottom part of the ITB across the lateral femoral condyle (bottom part of the thigh bone). The friction usually occurs below 30 degrees of knee flexion just after the foot strikes the ground during the gait cycle. This repetitive motion leads to inflammation and swelling of ITB. Downhill running reduces the knee flexion angle and can aggravate ITBFS, while sprinting and fast running increase the knee flexion angle and are less likely to cause the syndrome.

What are the symptoms?

Symptoms of ITBS consist of a sharp pain or burning on the lateral aspect of the knee. Pain can also be felt higher up along the length of the band. Occasionally there can be swelling or thickening of the tissue on the lateral side of the knee. Symptoms usually come on after a reproducible time or distance and will subside shortly after a run is over, but will return with the next run. If not treated the pain can progress and be felt with daily walking and particularly when ascending and descending stairs.

How can ITB be treated?

Physiotherapy is very beneficial in the treatment of ITB syndrome. ITB is not difficult to treat however like all injuries, the sooner it is treated the better.

Short term treatment involves decreasing pain and swelling through soft tissue massage, acupuncture and ultrasound. NSAIDS and ice can also be useful in the early periods of ITBS. It is important to treat both the intrinsic and extrinsic causes of ITB. A detailed biomechanical assessment is performed to identify the intrinsic causes of ITB (mentioned above). Often orthotic can be useful to correct pronation. Studies show that hip abductor and core muscle strengthening is beneficial in treating ITB. Training programmes are reviewed and may be adapted. Treatment does usually involve a period of rest from aggravating activities